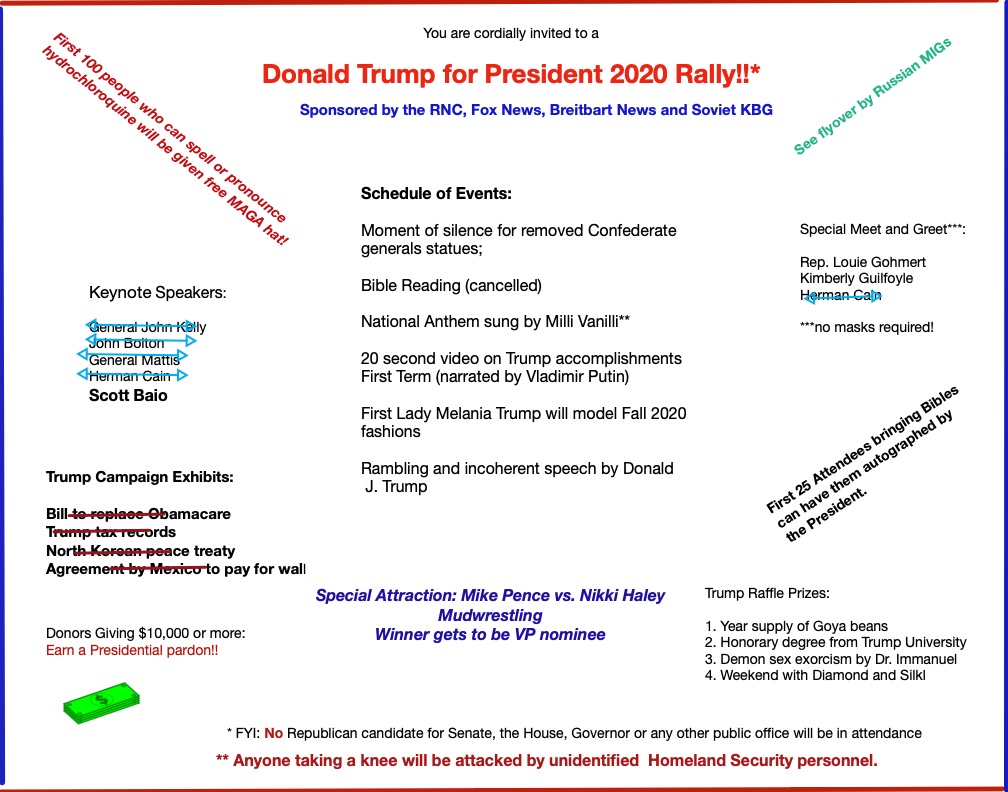 My fear is that the next presidential election will not be determined by ballots but by bullets; not at the polls but on the streets.

Axios: “80% of Americans say we are headed in the wrong direction.” I say that we have already arrived.

The United States has rested on its laurels since 1945. Other than the moon landings, what have we done in terms of significant accomplishment, national pride and purpose? How did we earn our sense of exceptionalism?

The coronavirus is the King Kong of our time. Scientists can’t stop it. Governments are powerless. It rumbles through with little resistance. Kong and the coronavirus did meet their match in New York City. Let’s call it a draw for now…

I don’t write for an audience of today. I write for a reader or student 20-50 years in the future so they may understand our current times, tone and culture. My sense is that they will be in disbelief in how poorly we conducted our politics, economy and health.

On Sundays, people used to buy the paper to read the “funnies.” Here’s what I read from the NewYork Times and Washington Post on Sunday and they are not funny. 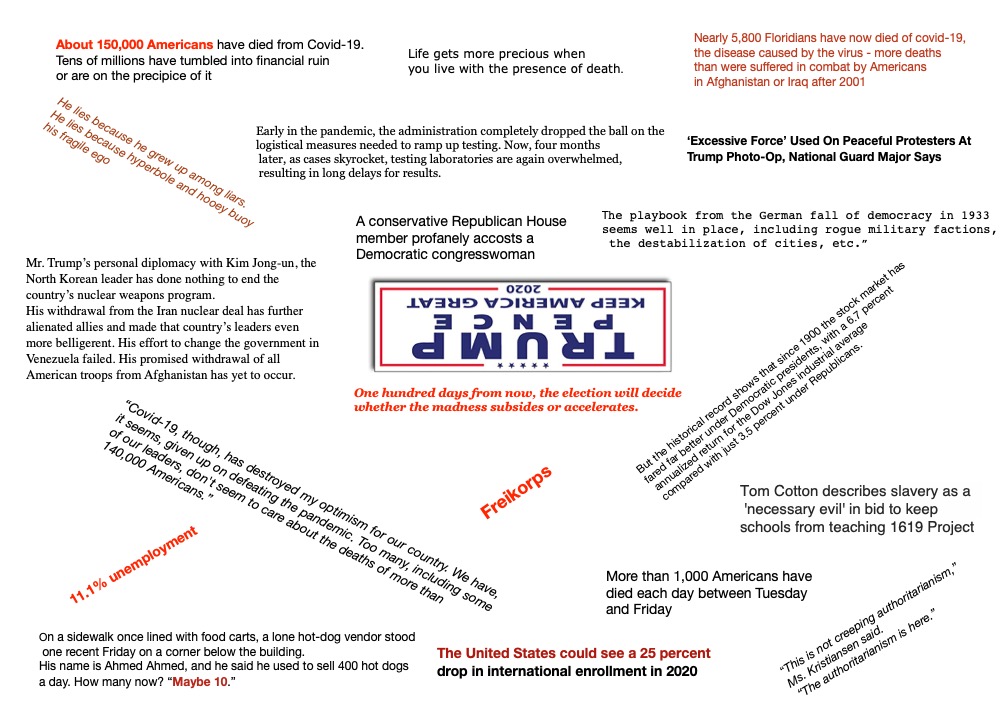 A few observations about the CNN and other political polls:

1.  It’s way too early for the Democrats to celebrate. We still have close to five months before election day (hopefully). I don’t think that these polls represent a pro – Biden sentiment as much as it does an anti-Trump revulsion. There are ways that Biden could lose this lead and it’s not impossible that Trump could regain additional standings in the polls. As an incumbent, Trump can cause all sorts of mayhem and  boost up his base.

3. It’s hard to believe that Trump still has the support of 40% of Americans. He has horribly mismanaged the coronavirus and his (to put it charitably) clumsy statements and behavior after the George Floyd killing has embarrassed most of the country, even some of his Republican supporters.

4. What does surprise me is that there is not more talk about removing Trump from the top of the Republican ticket. What are they waiting for? The convention is still a few months away and there should be more consideration to dumping Trump and going in a different direction.

Disclaimer: I am not an economist nor possess any special knowledge of economics or finance.

The federal reserve has reduced interest rates to 0%.

The following analysis represents my thinking and should not be used as a guide for investing etc.

What does this interest rate cut mean? 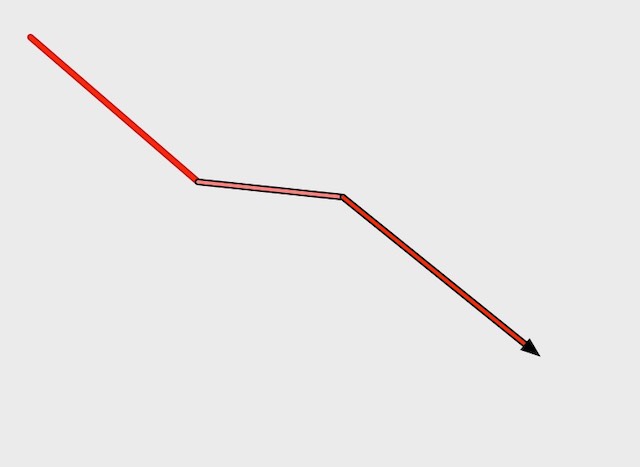 6. The country is seeking a hero, someone who displays competence, communication skills and leadership. Don’t be surprised if the next serious Presidential candidate comes from a governor who protects his state and ensures that the necessary medical care and resources are available. (Cuomo from NY??)

It may be hard to believe that a President currently experiencing an impeachment hearing in the Senate and with favorable poll numbers no higher than the mid to high 40s would be a favorite to win reelection. However I see trends that support my belief that Trump will be reelected and it’s not because of any great achievements by his administration.

First, after watching the Democratic debates, I don’t see a winning candidate that can roll in the mud with Trump and come out victorious. All the Democratic candidates are genteel, proper and appropriately reserved in their speech and conduct. In other words, they are all roadkill for Trump. Trump will bully, bluster and lie his way around opposition campaign strategy. Debating Trump is a waste of time. Anyone who watched the three Trump-Clinton debates realized that she wiped the floor with him. He was inarticulate, ill prepared and totally outclassed on knowledge of foreign and domestic policies. Yet he was elected President after three disastrous debate performances.

Second, the number of no and low information voters may be higher than those who have a grasp of current events and policy considerations. These voters are more influenced by memes and insults which are Trump’s forte. Many Trump voters do not wish to be informed, they wish to be entertained. They also want a spokesman who will confirm and support their prejudices, feelings of religious persecutions and class oppression.

Third, there is very little long range thinking in government and that also applies to many voters. They are content to kick the cans of global warming, income inequality, affordable health care for all, immigration reform and education reforms down the road. Trump voters show little concern for the impacts of regulation pullbacks and corporate tax cuts on future generations.

Fourth, Trump has a united cabal behind him called the Republican party. He faces no internal opposition from Congress and no serious political opponent emerged to contest his nomination. The Democrats, on the other hand, are showing signs of fracture between the moderates (Biden, Bloomberg, Buttigieg, Klobuchar) and the liberal/socialists (Warren and Sanders). This division and the resultant lack of enthusiasm, support and turnout will doom the Democratic ticket.

Fifth, the role of the press has been critical in past elections. The press would uncover scandals and other stories that could doom a candidates’ chances. In 2016, the Access Hollywood tapes did not change the minds of many Trump supporters. His moral failings and bizarre behavior did not hurt him at all, especially among white Christian evangelicals. The press has been marginalized. Today a Republican woman senator refused to answer an appropriate question about the impeachment proceedings from a reporter labeling him a “liberal hack.” Trump has deflected many of the charges against him by citing “fake news.” It appears that many voters have bought into this fraudulent tactic.

Today there are no editorials calling for Trump’s resignation of removal from office. Democrats have failed to go after Trump like he has attacked them. There is no Democratic spokesperson with the exception of Nancy Pelosi who has blunted Trump’s attacks. I don’t see things changing by November. Four more years…