About 50 years ago on a warm, sunny Sunday afternoon in June, I and about 480 classmates graduated from Camden Catholic High School. I don’t remember too much about the ceremony itself, I do recall feeling a bit anxious, excited and fearful as to what was coming next. It was not an easy time in our country. We were experiencing demonstrations and riots about civil rights as well as the Vietnam War. Students were shot at Kent State by National Guardsmen the month before. There were verbal and physical clashes between conservatives and liberals and there was a very unpopular Republican president. We had to deal with a lot of social and political turmoil. Some things never change, I guess…

So after 50 years, a few reminiscences…

Most of my memories at CCHS are pleasant. I enjoyed classes with Mr. Azores, Mr. D’Antonio, Mr. Budniak, Father Yorio, Sister Agnese, Mr. McDonald, Sister Victorine etc. I even survived a Latin class with Sister Wilfred. I also survived some good natured barbs from Mr. D’Antonio. I believed I got a very good education from CCHS.

I vaguely remember that our class was sometimes referred by some teachers as the “most ill behaved ever.” Due to some prank or mischief, we had to sit quietly in the school auditorium for a few hours reputedly perpetuated by a member of our class. We did enjoy a class where there were various personalities, temperaments and characters. 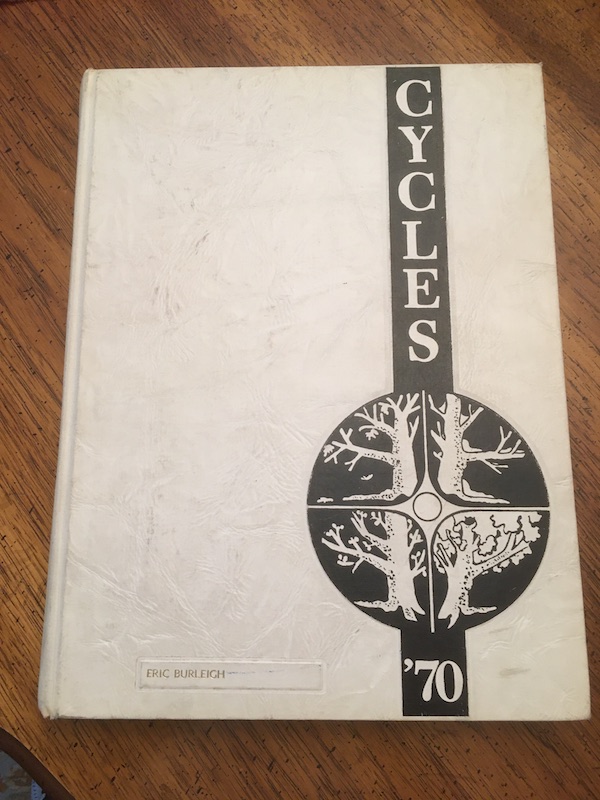 My most influential and favorite teacher was Father Walsh (Quince). Initially I rebelled at many of his views and I often challenged him and several classmates who shared his thinking. He was relatively patient with “Brother Burleigh” and welcomed our verbal jousts on topics including Vietnam, religion, politics, history, philosophy, justice and morality. Quince got me to think more critically and analytically. He was the epitome of a great teacher, one who inspires you for further learning.

I maintained and made a number of friendships at CCHS. Bob Chrzanowski has been a friend of mine since we were both 6 year olds from the mean streets of South Camden. Bob has retired and is enjoying his addiction to golf. Mike Mensinger and I have been friends for over 50 years. I was pleased to be the best man at his wedding. Mike and I had a “cut” contest (missing class) during our senior year at Rutgers. Surprisingly we both graduated. I don’t see Mike as much as I would like but I am attempting to perform a “political exorcism” online currently. I’m blessed to have Bob and Joyce Leonetti as friends. When my wife Chris was going through breast cancer, they were very supportive to the both of us. Bob had rented a bus for the Breast Cancer walk in Philadelphia years ago, which meant a great deal to Chris. Bob and Joyce have a number of charitable contributions. They epitomize the best from our class.  Bob was also my “go to” receiver when we played touch football in our youth.

I did not know Kathy Murphy, now Caldwell though we had graduated St Pete’s, CCHS and Rutgers together. My friend Ken (graduate of some defunct high school in Willingboro) had the great fortune and judgment to meet and marry her and I benefitted greatly from having her in my life also through Ken. Kathy is a great wife and mother of three very smart children and seven grandchildren. Kathy is a great friend, confidant and support for me. Kathy’s husband Ken has often expressed his disappointment that he did not attend CCHS.

I am pleased when I hear how many of my fellow classmates have done well in academia, business, government service, writing, the arts and charitable work. Two of my classmates have inspired me lately. Joe Mussomeli has inspired me to write. I have read some of Joe’s published essays and columns on politics and other topics and they are excellent. Jean Riberio Lizzio is my inspiration for health and athletics. Jean is an accomplished triathlete and maybe our class’s best athlete, male and female. What she has been able to accomplish in running and competition at this time in our lives when a walk around the block is sufficient exercise for many of us is remarkable.

I have been able to catch up with Jean and Donna Segrest Aristone at the mini reunions that have been held at Dooney’s. (I am prejudiced but I always thought that the young girls I graduated with at St Pete’s were the most attractive and nicest women at CCHS and beyond.) I also enjoy seeing Dorina and John Szczepanski, Patty Corbett, Bud Crane, Bill Foster and Rick Caruso at these mini reunions.

I am sorry that we did not have the 50th reunion as I would have liked to say hello and catch up with those I share comments and likes on Facebook including Rick Boyle, Sandi Weisel, and Ginger Breen.

P.S. I can remember the first two verses of our Alma Mater. I can’t remember what I had for dinner yesterday.

P.P.S. I am also mindful of classmates who have passed away. Most I did not know well. I do have some good memories (and stories) of Joe Williams, a great guy. Kathy Hennessey was my Chem lab partner and a very personable young lady.

One thought on “I Hope You Danced!”

This site uses Akismet to reduce spam. Learn how your comment data is processed.